The Jerome@Camargo program is an invitational grant program providing Jerome-funded artists from multiple disciplines with creative residencies at the Camargo Foundation in Cassis, France. The program offers time and space for artists to think, create, and reflect; to learn from a community of artists and scholars-in-residence; and to connect with resources of the Aix-Marseille-Provence area. Applications are by invitation only for Jerome grantees.

The program celebrates early career artists previously supported by Jerome Foundation and the shared legacy of the Jerome and Camargo Foundations, both founded by Jerome Hill. Applications are reviewed and recommended by a panel consisting of artists and arts leaders, including former Jerome@Camargo residents and Camargo Fellows. 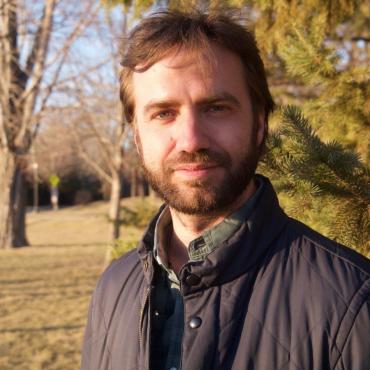 Mike Alberti grew up in Albuquerque, New Mexico. He received his MFA in fiction from the University of Minnesota in 2016. His work has appeared in Colorado Review, Crazyhorse, The Florida Review, Gulf Coast, Indiana Review, Mid-American Review, One Story, and elsewhere. His stories have won the Gulf Coast Prize in Fiction, the Howard Frank Mosher Short Fiction Prize from Hunger Mountain, and the Sweet Corn Prize from Flyway.

Alberti has been awarded fellowships and residencies from the James Merrill House, the Jentel Foundation, the Ucross Foundation, the Vermont Studio Center, the Virginia Center for the Creative Arts, the Minnesota State Arts Board, and the MacDowell Colony. He was awarded a Bread Loaf Fiction Scholarship in 2019. He lives in Minneapolis, where he serves as the Managing Director for Minnesota Prison Writing Workshop.

Alberti's work explores the relationship between people and place, with a focus on the environment and specifically on the way that climate change is affecting that relationship. He is working on a novel and a collection of short stories. While in residence at Camargo, he will finish his first collection of short stories, Some People Let You Down. 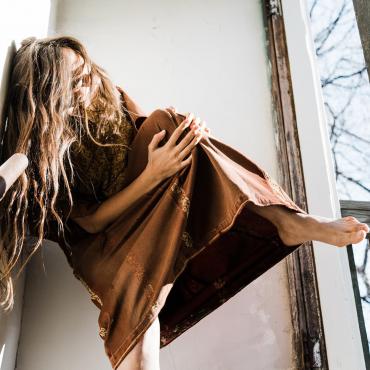 LeilAwa [Leila Awadallah] is an artist working with movement through embodied research and storytelling. She is a Palestinian-American who engages culturally and politically with her ancestral roots and the geographic soils in which they are growing. LeilAwa lineages are Mediterranean, yet her body was born and lives on Dakota / Anishinaabe lands.

LeilAwa’s work manifests in dance pieces, durational performance installations, and short experimental film. Her dance examines the body’s resistance to settler colonial violence and systematic distortions and erasures, and the choreography of occupation in the context of Palestine. Her physical movement seeks connection to place, land, home and memory and is created within a framework of the Arab imaginary.

While at Camargo, LeilAwa plans to focus on a daily practice of body watani (Arabic for “my homeland”) in order to build a clearer physical practice for future work and collaborations. She seeks to learn from land based, durational improvisation practices rooted in traditional dances of the region: baladi, raqs sharqi, and tarantella. The physical work will be paired with historical / cultural / spiritual research questions in order to merge what subconsciously manifests during the embodied practice, with active and reflective thought that helps guide the mind-body through the terrain of memory. 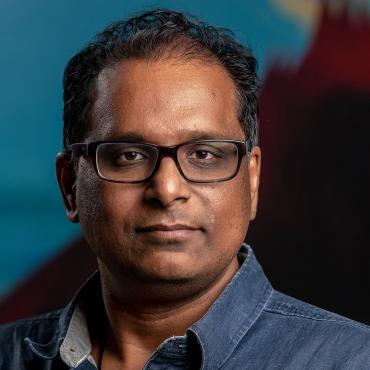 Ram Devineni is a documentary filmmaker, publisher and founder of Rattapallax films and magazine. He produced The Russian Woodpecker, which won the Grand Jury Prize at the 2015 Sundance Film Festival and was nominated for an Independent Spirit Award. He is the creator of the augmented reality social-activist comic book series, Priya’s Shakti which received the Tribeca Film Institute New Media Fund from the Ford Foundation and was supported by the World Bank.  Devineni was honored by UN Women as a “gender equality champion” for creating India’s first female superhero character.

While at Camargo, Devineni will develop an interactive comic book that focuses on migration of women from Syria and other countries into Europe resulting from recent conflicts. The comic book will be based on real-life interviews and stories and use augmented reality to bring the artwork to life. 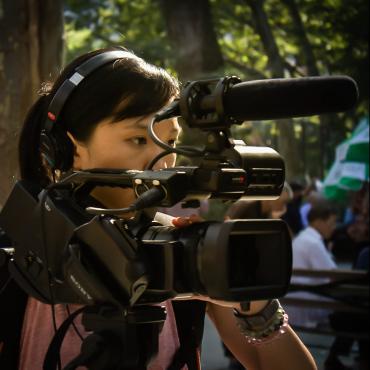 ManSee Kong is a filmmaker and cultural worker born and raised in New York City. Her film and collaborative media works are inspired by narratives rooted in immigrant life and grassroots social movements. Along with artists Tomie Arai and Betty Yu, she co-founded Chinatown Art Brigade in 2015, a cultural collective that facilitates and creates community-led public productions to advance social change.

During her residency at Camargo, she will review her personal archive of nearly two decades of photo, video, and print material documenting tenant organizing in Manhattan Chinatown as a youth organizer with CAAAV Organizing Asian Communities, and develop a film and multimedia project with community-based multilingual accessibility at its core. She plans to visit tenant organizing groups in nearby Marseilles to learn about local housing conditions and tenant activism efforts. Having time and space at Camargo to reflect and meld these materials, memories, and experiences will allow her to close out years of archiving and community-building towards developing a film and multimedia project that will serve as a chronicle of gentrification in Chinatown and a tribute to a fierce elder Chinatown tenant leader who transitioned in 2019 at the age of 97. 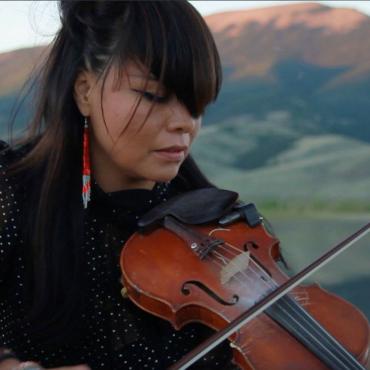 She has performed at The Whitney Museum of American Art and The Museum of Modern Art in New York, the Musée d’Art Contemporain de Montréal, and the Centre Pompidou, Paris, among countless established and DIY venues in the US, Canada, and Europe. In 2008 Ortman founded the Coast Orchestra, an all-Native American orchestral ensemble that performed a live soundtrack to Edward Curtis’s film In the Land of the Head Hunters (1914), the first silent feature film to star an all-Native American cast. Ortman is the recipient of the 2017 Jerome Foundation Composer and Sound Artist Fellowship, the 2016 Art Matters Grant, the 2016 Native Arts and Culture Foundation Fellowship, the 2015 IAIA’s Museum of Contemporary Native Arts Social Engagement Residency and the 2014-15 Rauschenberg Residency. She is also a participating artist in the 2019 Whitney Biennial. Ortman lives in Brooklyn, New York.

As she embarks on the creation of a new work at Camargo, she plans to do ambient field recordings at the Calanques National Park and in Cassis to gather new compositional textures. 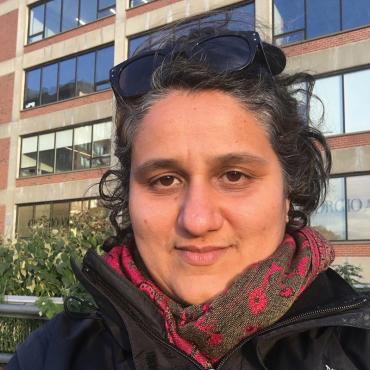 Laimah Osman is a queer Afghan American visual artist, educator, and graphic designer. She makes multidisciplinary art that celebrates her cultural heritage and experiences. Osman’s family left Afghanistan for the U.S. when the Soviet Union invaded in 1979. Since then, she connects to her Afghan culture through her family, community, and the media. Particularly after 9/11, Afghan and Muslim people are singularly portrayed in the media in connection to violence and war. Osman wants to present the richness and diversity of her Central Asian culture and hopes to challenge the one-dimensional representation of Afghan and Muslim people that fuels today’s atmosphere of racism and xenophobia.

Osman’s visual work is based in the research, study, and practice of various printmaking and book arts processes. The origins of these different techniques are tied to global histories of communication and offer limitless possibilities for storytelling and socially engaged work. She is drawn to the nuances and possibilities for chance, repetition, multiplicity, improvisation and collaboration in generating work, as well as the materiality as a counter to the digital age.

While at Camargo, Osman plans to explore ideas around migration, safety and security in dialogue with others who are considering and expressing similar global concerns. She will travel to Marseille to see how this large modern “port city” is shaped by its immigrants. She also plans to experiment with different folds and bookbinding methods to make structural decisions and prototypes for the artists’ books. 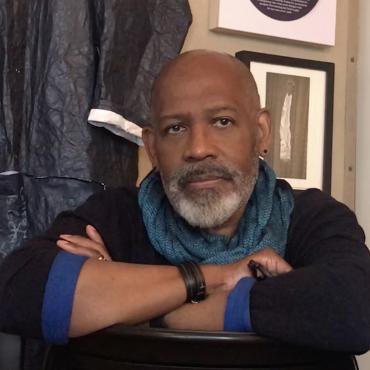 Tony Whitfield is a multimedia artist, designer and educator whose practice draws upon collaborative relationships to present and interpret urban experience to illuminate social change, particularly in the lives of underrepresented populations, engendering greater understanding of the histories that underpin current cultural phenomena.

During his residency at Camargo, he will be focused on the development of the narrative and textual content of the video and audio- visual components of Over Deep Water, a multimedia theatrical meditation on the experience of caregiving; and Garden Under Bluer Skies, an installation inspired by the palliative potential of herbal naturopathic practices from which HIV/AIDS drug therapies were derived. These two projects will be presented as part of This Dancerie, a cycle of work that explores a century of gay male queer life in Paris and New York. These works recognize the 25th anniversary in 2021 of the implementation of three drug therapies, transforming AIDS/HIV from a terminal illness to a manageable chronic condition.